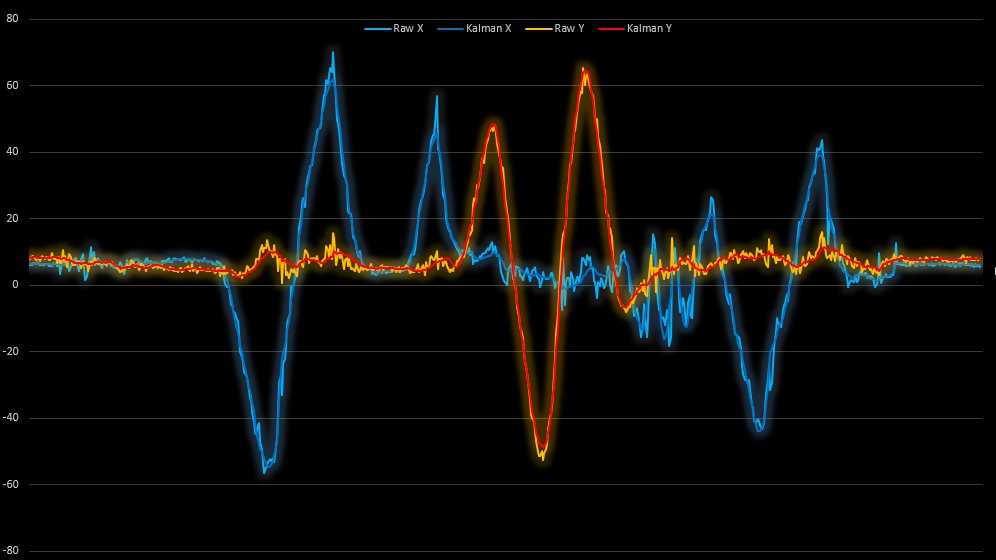 In this guide we will go over some very basics on the use of a Kalman filter for sensor fusion. There is some very complex math involved which is well over my head, however we do have some working code and very good reference sites.

A prerequisite for this guide is to have a gyro and accelerometer from an IMU already up and running on your Raspberry Pi. A guide to interfacing an IMU with a Raspberry Pi can be found here.

The code for this guide can be found under the gyro_accelerometer_tutorial03_kalman_filter directory.

The Kalman filter, also known as linear quadratic estimation (LQE), is an algorithm that uses a series of measurements observed over time, containing noise (random variations) and other inaccuracies, and produces estimates of unknown variables that tend to be more precise than those based on a single measurement alone. More formally, the Kalman filter operates recursively on streams of noisy input data to produce a statistically optimal estimate of the underlying system state. The filter is named for Rudolf (Rudy) E. Kálmán, one of the primary developers of its theory.

The Kalman filter has numerous applications in technology. A common application is for guidance, navigation and control of vehicles, particularly aircraft and spacecraft. Furthermore, the Kalman filter is a widely applied concept in time series analysis used in fields such as signal processing and econometric.

FYI: A Kalman filter was used to assist with navigation in the Apollo 11 moon landing.

If we had to explain it in one sentence what a Kalman filter is: “It’s a method of predicting the future state of a system based on the previous ones.”

If you want to understand the ins and outs of the Kalman filter, then TKJ Electronics post is a must read.  I think I must have read through it  15 times.

Once you have a working Kalman filter function, it is very easy to slot  into existing code.
Below is our Kalman filter for the Y axis, I have another one for X axis;

We will also need to declare our global variables

The code in the repository will print out both the complimentary and Kalman filter values.

If you have any recommendations or improvements, please let us know.

Other Guides and Tutorials