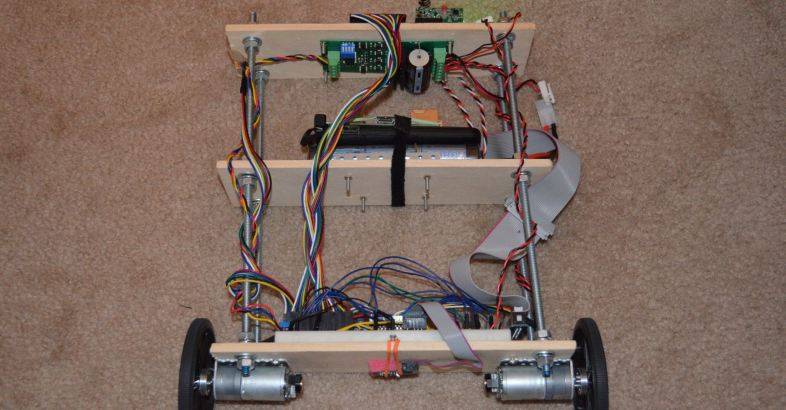 I have had success with getting PiBBOT to balance.


When I saw my first two wheel balancing robot I was very fascinated.  And after receiving my Raspberry Pi, I decided to build one myself.
PiBBOT (Pi Balancing roBOT) is my first successful balancing robot. And it has room for improvement and extra functionality.

When building PiBBOT, I had a few roadblocks I needed to overcome;


The TFT displays the angles from the accelerometer, gyro, complementary filter and power to the motors.
The buttons are to turn the motors on and off and to reset the gyro.

The basics behind a balancing robot is based on the Inverted Pendulum concept. The goal is to have a control algorithm called Proportional Integral Derivative (PID) to keep the robot balanced by trying to keep the wheels under the center of gravity. Eg. If the robot leans forwards, the wheels spin forward trying correct the lean.

One axis of an accelerometer and one axis from a gyroscope are used to measure the current angle and the rate of rotation. A well timed looped is needed to keep track of everything.
Calculations are then done to provide power via PWM to the motors and in the right direction to keep the robot upright.

To measure the angles, I use the MinIMU-9 v2 Gyro, Accelerometer, and Compass inertial measurement unit(IMU) from Pololu.

This is a digital IMU and can be read using I2C. It is also powered off the Raspberry Pi 3v pin.

Here you can see the 3 individual I2C addresses;


When using the IMU to calculate the angle, readings from both the gyro and accelerometer are needed, which are then combined. This is because using either on their own will result in inaccurate readings.

Here is why;
Gyro - A gyro measures the rate of rotation, which has to be tracked over time to calculate the current angle. This tracking <and noise> causes the gyro to drift.  However, gyros are good at measuring quick sharp movements.

Accelerometer - Accelerometers are used to sense both static (e.g. gravity) and dynamic (e.g. sudden starts/stops) acceleration. They don't need to be tracked like a gyro and can  measure the current angle at any given time. Accelerometers however are very noisy and are only useful for tracking angles over a long period of time.

Later I will discuss how to combine the angles from both sensors.


Converting the RAW gyro and accelerometer values to something useful.

gyr_x_raw = raw data acquired from the gyro X axis.
G_GAIN  = 0.00875, which is based off the sensitivity level used by the gyro.
rate_gyr_x =  the rate of rotation per second.

I have DT set top 0.02, which is 20ms. This is how long it takes to complete one cycle of the main loop. This loop period has to be constant and accurate, otherwise your gyro will drift.

The accelerometer I use is LSM303DLHC
The X angle can be calculated by using trigonometry and the raw values from the accelerometer Y and Z axis. This is done using the Atan2 function to return the principal value of the tangent of Y and Z, expressed in radians.

CFangleX is our final angle which will be used to balance PiBBOT.


In summary, our main piece of code for angles is;

A PID control algorithm is used to balance the robot by driving the motors based on the tilt. 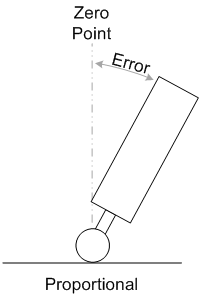 The portion of code for the P term is;

The integral (I) term of the PID is based on the current angle difference or error from Point Zero multiplied by the I gain, which is that accumulated over time. The integral control assist in balancing the robot if it is moving. 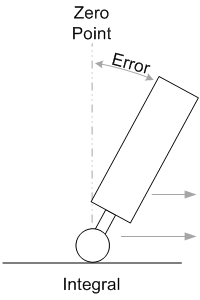 The portion of code for the I term is;

The derivative (D) term of the PID is based on the current rate of rotation. It is used to dampen the response as the robot reaches Zero Point. Without the derivative control, the robot will overshoot and than start to oscillate. 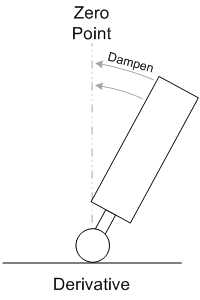 The portion of code for the D term is;


The addition of all the PID values will be used to drive the motors in the right direction and with the right power;

Getting the PID values correct(KP,KI,KD) is the hardest part of building PiBBOT.

The PID values need to be manually tuned;


It is best to change these values while trying to balance to see the results in real time, a potentiometer could be used for this. I have used the RF module to increase or decrease the values.